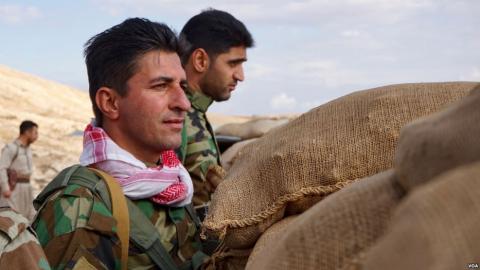 On the hardscrabble lower reaches of the mountains overlooking the town of Bashiqa in northern Iraq, Commander Rebawar leans over the sandbags and points to the nearest position of Islamic State fighters a half kilometer or so below. They are dug in — and no doubt watching us.

Two days ago, the jihadists were launching mortars at the 47-year-old commander and his detachment of 20 Iranian Kurdish fighters, five women among them. But regular, pummeling airstrikes by U.S. and Iraqi warplanes appear to have stopped the skirmishing. On this damp, chilly morning, the quiet of the front line is broken only by the occasional roar of passing warplanes and, in the far distance, the crack of small-arms fire.

Bashiqa, 30 kilometers from Mosul, can trace its origins to Assyrian times; the town's name comes from the merger of two Neo-Aramaic words meaning "house of lovers." But there's no love lost between the town's jihadist occupiers and the encircling Kurds, including this Iranian Kurdish detachment.

Rebawar waves his hand and explains: "Bashiqa is totally surrounded — there's nowhere for the jihadists to go. But the problem is that they have planted lots of mines and bombs." Much has been written about the growing influence of Iran in Iraq — on the Revolutionary Guards training and equipping of Shi'ite militias and Tehran's sway over the government in Baghdad. But there's another Iranian presence in the war in Iraq, albeit smaller, represented by Iranian Kurdish fighters who have smuggled themselves across Iran's porous borders and joined the Kurdish peshmerga, or fight alongside them in their own units such as Commander Rebawar's detachment from the Revolutionary Khabat Organization of Iranian Kurdistan.

Ethnic Kurds make up nearly 9 percent of Iran's population of 80 million people, and Iran has fought for years against a variety of Kurdish groups seeking regional autonomy. Clashes along the Iran-Iraq border have increased in recent months between Kurdish groups and Iran's Islamic Revolutionary Guards.

In September, two days of fighting left 10 Iranian soldiers dead or injured. Hundreds of Iranian Kurds are thought to be fighting both in northern Iraq and Syria now, although numbers are difficult to verify. Kani, 30, left, was nearly killed early in the Mosul offensive when a suicide bomber exploded a car packed with explosives 60 meters from her. Seventeen peshmerga fighters were killed in the blast. Nov. 2, 2016. (J. Dettmer/VOA)

Twenty fighters from Khabat (Kurdish for "struggle") are present here on the Bashiqa front line — fighters are rotated in and out, serving a week and then resting for a week. Khabat has about a thousand fighters in all, and most of them now are in Iraq. Rebawar and his fighters see nothing odd about this.

"There is one Kurdistan," he says as the sun breaks through. "Our enemies divided us between four countries, but we want to be united. We are nationalists and want one democratic Kurdistan."

Rebawar fought in the 1980s for Kurdish independence but in the 1990s fled with his family to Sweden, where he became a beekeeper and driving instructor.

"I had 20 hives," he says. "Sweden is a beautiful country." He sighs. The rise of the Islamic State terror group, which he refers to as Daesh, brought him back to the front lines.

He worries about the growing power of Iran and what that will mean for Kurds.

"Tehran's influence on the Iraqi state and the Shi'ite militias and the Iraqi army is strong. We hope the United States and the West, who smile on us and say they are friends, will remain so after the fight against Daesh, or we fear something very bad could happen here coming from the Shi'ite militias," says Rebawar, an energetic, compact man, balding and mustachioed.

His unit has seen some fierce action. Their role in the Mosul offensive nearly came to a quick and bloody end last month when a jihadist suicide bomber detonated a Ford SUV packed with explosives 60 meters from them. The blast killed 17 Iraqi Kurdish peshmerga. Kani, a 30-year-old from Mahabad, Iran, who sports a crewcut, says it was a shock.

"All I could do was to duck down and wait for the blast and debris to pass over me," she explains.

Kani says her family was supportive of her decision to join Khatab. She laughs, as do the other female fighters, when asked if they are treated as equals of the men in the detachment. They are among the few women in combat among Kurdish groups in northern Iraq — unlike in northern Syria. Aween, 29, an Iranian Azeri, says she fights for Kurdistan because it is inclusive of minorities. Nov. 2, 2016. (J. Dettmer/VOA)

"We have to be better than the men to prove ourselves," says Aween, 29.

Aween is from the Turkic Azeri ethnic group but says she fights for Kurdistan because it is inclusive of minorities. A fighter for four years, she says her parents were unhappy with her decision to enlist with Khatab. Her face clouds when she explains she's divorced and that her ex-husband doesn't allow any communication between her and her 10-year-old son.

Rebawar agrees the women are the most determined of his detachment and clamor to take on the toughest roles, to be stronger and braver than the men.

The women say they are driven by their hatred for the Islamic State group. They see themselves as punishing the jihadists for their abuse and enslavement of women. Masuma, 28, an Iranian Kurd volunteer, stands guard observing IS fighters nearby, Nov. 2, 2016. Her brother is fighting alongside her. Before enlisting to fight, they were mule smugglers in Iran. (J. Dettmer/VOA)

Masuma, a dark-haired 28-year-old whose brother is also in the unit, says, "I joined to fight Daesh."