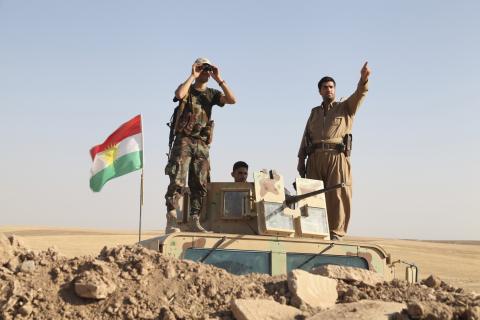 The planned assault on the Islamic State-held city of Mosul in northern Iraq has the potential to cause a humanitarian disaster unless the international community is properly prepared, the foreign minister of the Kurdistan Region of Iraq has warned.

In an interview with The Irish Times, Falah Mustafa Bakir said measures will be urgently needed to assist up to a million civilians expected to flee Mosul after the operation to retake it has begun.

An offensive aimed at pushing Islamic State (Isis), out of Iraq’s second-largest city is gathering momentum more than two years after it was abandoned by government forces.

Kurdish Peshmerga and Iraqi army forces have been gradually taking up positions around Mosul in preparation for an assault on the city that will have the support of the US-led coalition fighting Isis in the region.

Iraq’s prime minister Haider al-Abadi has said the recapture of Mosul would constitute the effective defeat in Iraq of Islamic State, which has held the city since June 2014.

However, one million people are expected to flee the offensive, a situation which, neighbouring Kurds warn, could turn a humanitarian crisis into disaster.

Bakir, a minister in the Kurdistan Regional Government (KRG), which runs the autonomous Kurdish enclave of northern Iraq, said that unless immediate steps were taken, “a humanitarian disaster is approaching and it is important for the international community to help avoid that catastrophe”.

“We believe the Kurdistan region would be ground zero for that,” he added.

Bakir said the region was already “stretched beyond our limits” because “we have today nearly two million internally displaced people from the rest of Iraq and Syria. a 30 per cent increase in our population, which means they have come to share electricity, power, water, health, education and whatever services we had”.

As if to underline his point about stretched resources, the power cuts out while he is speaking, momentarily throwing the room into darkness.

“I can still remember those days when people were calling friends and families ‘what to do, shall we remain?’, ‘yes, I am here, we are here, we will be okay’. But it was difficult, we were at risk of losing what we have achieved so far.

“We are proud of the role of the peshmerga [the KRG’s security forces]. So yes, they [Isis] were very close.”

Although Sunni and Shia militias as well as the Iraqi security forces are all involved in the preparations for the final push on Mosul, the Peshmerga expected to play the leading role.

Earlier this week, Abadi, the prime minister, sent a message to the KRG that its forces should withdraw from recently liberated areas in the Ninevah province, of which Mosul is the capital, and desist from further expansion.

The KRG, however, rebuffed him.

Bakir repeatedly refers to errors he claims were made by governments in Baghdad.

“The problem was that the Iraqi army, which the United States and Nato spent lots of time, energy, efforts and resources building, arming and training, could not resist [Isis] because it was built on wrong foundations.

“And in fact, Isis came as a result of the wrong policies of the former prime minister [Nouri al-Maliki] and Baghdad being hostile to Kurdistan, denying Kurdistan its legitimate constitutional rights, excluding the Sunnis from power, marginalising them.”

When asked about the region’s mooted independence referendum for this year, Bakir said “we have to be realistic”.

The Iraqi state had been established on the basis that Kurds, Arabs and other minorities were partners in the country, he said, “but from day one until now we were never been dealt with as equal partners or equal citizens of this country.

“We have seen during monarchy, republican system, a centralised system, in an autonomous agreement, within a federalised system, it’s the same – the mentality of majority versus minority or strength against weakness.

“That cannot bring about stability and prosperity.

“Therefore the day has come when Irbil and Baghdad have to sit down together and discuss the future” of their relations.

The options, he said, were confederation, two states in one or “full-fledged independence”.

“But we want to talk about these issues with Baghdad through peaceful and meaningful dialogue to put an end to this clumsy kind of relationship.”

He said Irbil-Baghdad relations had been “ad hoc”, dysfunctional and had not worked. “So either put it to work in a way that would be satisfactory to both or decide to put an end to this.”

The KRG leadership intended to send a delegation to Baghdad, he said.

But without “understanding, agreement and satisfaction . . . then the people of Kurdistan should be given the opportunity to exercise their right to self-determination”.