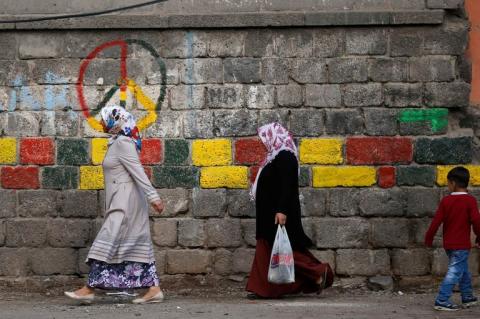 DIYARBAKIR, Turkey — In a region where patriarchy generally is the rule, Kurdish society has long stood out as an exception.

A wife who is beaten by her husband can apply to have his salary diverted to her as part of his punishment.

Kurdish towns must, by general agreement, have co-mayors, one man, one woman. All members of Parliament have to run on gender-balanced tickets. New hires to municipal and patronage jobs go to women until the work force is half male, half female.

In local government, boards and committees have male and female co-executives, with one exception: the Women’s Affairs Department. Any decision-making process regarding women can be made only by women.

Even Kurdish guerrilla units are fully integrated by gender: Women occupy the same combat roles as men, and when the military goes to war, it sends a woman to command one of its major units.

There is one big problem with this aspect of Kurdish life, in Turkey at least: It has, in effect, been outlawed as part of the Turkish government’s crackdown after a failed coup attempt last summer. Along with arresting Kurdish political leaders, the government is taking aim at measures meant to promote gender equality.

This was the world as envisioned by the banned Kurdistan Workers’ Party, or P.K.K. The P.K.K. may be a terrorist organization in the view of the Turkish government, Europe and the United States, but it has also long made women’s rights a centerpiece of its political platform.

That platform is one that mainstream legal political parties have actually been putting in place in many heavily Kurdish areas of eastern Turkey. In that region, the P.K.K.’s philosophy enjoys wide popularity, the pro-Kurdish H.D.P. party has won 50 seats in Turkey’s Parliament and its local sister parties have won mayoral elections in 103 municipalities.

Early in November, though, the Turkish government cracked down on the H.D.P. — the third-largest political party in the country’s most recent national elections, where it won six million votes — jailing 10 of its members of Parliament, including its male and female co-leaders.

The authorities moved to arrest co-mayors throughout the Kurdish regions, appointing government trustees to take their place. So far, trustees have been appointed to take over the administration of an estimated 40 of the 103 communities affiliated with the H.D.P.

One of the first things the trustees have done in recent weeks is to begin to dismantle the co-executives, closing some women’s centers and ruling the diversion of abusers’ paychecks illegal.

“This crackdown is actually aiming at women and shutting down women’s organizations,” said Feleknas Uca, a member of Parliament from Diyarbakir. “It’s a blow against women’s freedom. They made lots of statements like, ‘You should go and have three kids.’”

The gender rights transformation in Kurdish areas of eastern Turkey goes back more than a decade, though it gained momentum in government when the H.D.P. party did so well nationally the last few years. While pro-Kurdish, the party also includes ethnic Turkish members. Much of the H.D.P. philosophy comes from the ideology of the P.K.K., whose leader, Abdullah Ocalan, from early on promoted women as equal partners with men, even on the battlefield.

To many left-leaning women in Turkey and the West, the P.K.K. is thus considered a heroic champion of gender equality and one that, unlike other revolutionary groups, has managed to put its principles into practice, not only on the battlefield but also in homes.

This has happened in a society that traditionally was strongly patriarchal, where polygamy was common, honor killings accepted and girls not allowed to sit at the same table as their fathers. Pregnant women were not allowed in public, and women were admonished not to be seen laughing.

One of the first things the H.D.P. party did was to rule that no man who had more than one wife could stand for office or hold party positions of any kind. Husbands convicted of abuse were similarly barred from the party. But the biggest innovations were the co-leadership positions at every level, and the principle that women would make their own decisions on women’s issues.

“This has caused a transformation, you cannot imagine the level of it,” said Meral Danis Bestas, a member of Parliament from Adana in southern Turkey.

The emphasis on gender equality has reached deep into Kurdish homes and family life. Many political movements espouse equal rights, but that does not mean men start washing the dishes.

A Kurdish journalist, Sedat Yilmaz, said the attitude changes were more than just talk. When he first came home to his rural village from college and began doing the dishes with his mother, his uncle dropped in one day and berated them. “We sent you to college to learn how to be a man,” he said.

“My mother pretended to agree with him, but I could tell she was pleased,” Mr. Yilmaz said.

“I can’t say everything is equal inside the home now,” Ms. Bestas said. “But women are now comfortable saying, ‘If I’m in the kitchen, you should be in the kitchen too.’” And when the woman is the breadwinner, husbands are expected to do the lion’s share of the housework; when they don’t, the women can go to a women’s center to complain formally.

“At home my father consults me about everything now,” said Pelin Uces, 26, a student in international relations. “We discuss politics, I can openly confront him and now my family wants us to be more powerful. They tell me, ‘Get a driver’s license so you can stand on your own.’”

Sitting in a cafe in Diyarbakir with two friends, she was swapping war stories they had heard about Kurdish women who were guerrillas — “Women make the best snipers,” Ms. Uces declared. Each of them, similarly dressed, also had an armful of knitting, making scarves and sweaters as they chatted. “Our army has women guerrillas,” one of her friends said. “The Turks don’t have that.”

Arzu Demir, who has written two books about the Kurdish female guerrillas, says that the female role in Kurdish military units was a major factor in their growing assertion of equal rights generally.

“Their strength comes from being organized, and because they are armed,” she said. “There are always men thinking that women are slaves, but when women are an armed force, men are scared of them.”

Both of her books have been banned in Turkey, and Ms. Demir is facing criminal prosecution for them. They have also been popular, going into multiple printings and making best-seller lists even in western Turkey among ethnic Turks.

Vahap Coskun, a law professor at Dicle University in Diyarbakir and a critic of the P.K.K., concedes that the Kurdish parties’ promotion of women has had an impact far beyond their home regions.

“It also influenced other political parties to declare more women candidates, in western Turkey too,” he said. “It has also increased the visibility of women in social life as well as the influence of women in political life.”

While no other national party has women standing for 50 percent of offices, like the H.D.P., female political candidates have increased greatly even in the conservative, pro-Islamic ruling A.K.P. party.

Ms. Bestas, the lawmaker, said she expected that under emergency rule the Turkish government would continue to undo a lot of the concrete advances Kurdish women have made. Turning attitudes back will be much harder, she said. “This crackdown is not powerful enough to change our principles.”