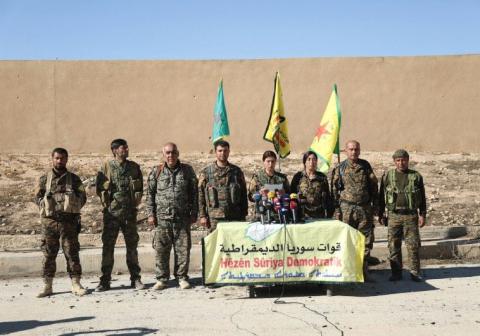 As the preliminary maneuvering begins to take Islamic State’s capital, Raqqa, the forces that seek to take control of the city are also at war with each other.

The US-backed Syrian Democratic Forces announced last Friday the commencement of an operation to conquer the northern Syrian city of Raqqa. The operation was designated “Euphrates Wrath.”

Raqqa is the capital of the “Caliphate” maintained by Islamic State. In tandem with the effort currently under way to recapture the Iraqi city of Mosul from ISIS, the loss of Raqqa would represent the final eclipse of the Islamic State as a quasi-sovereign entity. At this point, it would revert back to the guerrilla/insurgent/ terrorist force which it constituted prior to the outbreak of the Syrian civil war.

Be the first to know - Join our Facebook page.

Conquering the city is likely to be a slow business. However, the final outcome is not in doubt. The Islamic State, whose main slogan in Arabic is Baqiya watatamadad (remaining and expanding), has in reality been contracting since the high point of its advance in the autumn of 2014. Its eventual demise, at least as a quasi-state entity, is assured.

But Syria is host not only to the war against ISIS, but to a series of other, interlocking conflicts.

And one of these additional conflicts pits the two main candidates for the leading role in the fight against ISIS in Raqqa against one another.

Observe: there is in Syria today no less than five identifiable conflicts taking place.

The problem for those seeking to cobble together a force to take Raqqa city –and by so doing destroy the Islamic State – is that the two eligible forces to carry out this action are the mainly Kurdish SDF, and the Turkish- backed, mainly Islamist Sunni rebels – but these forces are at war with one another! After the SDF announced the commencement of the Raqqa campaign this week, Turkish President Recep Tayepp Erdogan expressed his opposition to the decision, repeating his assertion that the Kurdish YPG are merely “another terror organization... a side branch” of the PKK.

Following the SDF’s announcement, Chairman of the US Joint Chiefs of Staff Gen.

Joseph Dunford met with Turkish Chief of Staff General Hulusi Akar in Ankara. After the meeting, Dunford said that the US would work together with Turkey to develop a longterm plan for “seizing, holding and governing” the city.

Dunford stated that the US believed that the largely non-Arab SDF “wasn’t the solution” for “holding and governing” largely Sunni Arab Raqqa.

A judicious reader will notice that Dunford’s statement doesn’t say that the SDF is unsuitable for the job of capturing the city, only for holding it afterward.

The root of the deep differences between the SDF and the Turkish-supported rebels are to be found not only in the soil of northern Syria. Rather, they are inextricably linked to the long insurgency fought by Turkey’s Kurds against a succession of governments in Ankara since 1984.

The fragmenting of Syria formed a historic opportunity for the Syrian Kurds, which they have seized. The PYD, the Syrian Kurdish franchise of the PKK organization, established three self-governing cantons along the Syrian-Turkish border in 2012. In 2015, against the background of the fight against ISIS, they managed to unite two of these: Jazeera and Kobani. On March 17, 2016, the ruling coalition in these areas announced the formation of the Federation of Northern Syria – Rojava.

The US since October 2015 has found the Kurdish YPG to be a formidable and useful ground partner to coalition air power against ISIS. But the Kurds themselves, while welcoming the alliance with the US, have long sought another objective, namely, to unite the three cantons – connecting Jazira/Kobani with Afrin in the far northwest of the country.

From a Turkish point of view, the prospect of a PKK-linked party controlling the entirety of the 800-km. border between Syria and Turkey is entirely unacceptable. Since mid-2015, a Kurdish insurgency is once again under way against the Turkish government. As part of the general post-coup crackdown, Erdogan this week arrested Turkey’s most prominent Kurdish politician, Salahattin Demirtas of the HDP.

Since 2012, the instruments Turkey chose to use to contain the Syrian Kurds were the mainly Islamist rebel movements of northern Syria, from the more moderate elements across to Jabhat al Nusra and possibly at one time also ISIS.

By mid-2016, supporting ISIS was no longer an option, and the rebels by themselves were too weak for the purpose. So in August, Turkey boldly launched a direct intervention into northern Syria. ISIS were the ostensible target, but the clear purpose was to bisect Syria’s north, rendering a sufficient area impassable that the danger of the Kurds linking up their cantons would disappear.

This process is not yet complete. The Kurds are still west of the Euphrates, in the town of Manbij. And the crucial ISIS-held town of Al-Bab remains unconquered. The Turks would like to help their rebel clients take the town and end any further possibility of Kurdish unification. But here, in the usual labyrinthine way, other players enter the picture.

Al-Bab is close to Aleppo. It is possible that the Russians have warned Erdogan that the town remains out of bounds.

But the point to bear in mind is that the process of coalition-building against ISIS in Syria is complicated by the fact that two potential members of the coalition – the US-backed SDF and the Turkish army with their Sunni Arab allies – are currently engaged in a direct conflict with one another.

In this regard, it is worth noting the yawning gap between the military achievements of the Syrian Kurds and their dearth of similar successes in the diplomatic and political fields. While YPG commanders call in US air strikes against ISIS, no country has recognized the Federation of Northern Syria, and it has received little media coverage.

Dunford’s hurried visit to Ankara reflects the diplomatic state of play. Namely, that the agenda of a Turkish government, even one that openly supports Sunni jihadis, must be indulged, while that of a Kurdish ally can be dismissed. The Kurds may have little choice in the matter. But they should be careful not to find themselves quickly abandoned once Operation Euphrates Wrath is done.